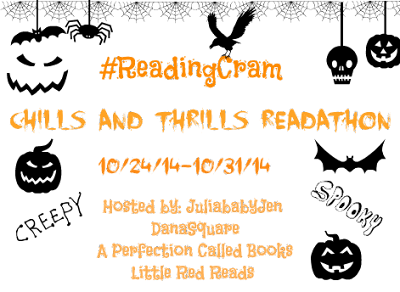 Spell-It-Out Challenge!
This challenge is hosted by APerfectionCalledBooks who is also one of the hosts for this readathon!

The Challenge: pick one of the following words: Ghost, Witch, Zombie, Howl or choose your own spooky word and using each letter, find a title of a book you've read this year to "spell-it-out".

Considering the fact that I had no "e" or "r" titles, this was kinda hard. But I prevailed, and after much googleing (don't judge me), I found a word! Huzzah!

Gone by Michael Grant
Hunger by Michael Grant
Origins by Kristen Middleton
Under the Skin by Michel Faber
Luxe, The by Anna Godbersen
Infinite Sea, The by Rick Yancey
Say Her Name by James Dawson
Hours on the Moon, 172 by Johan Harstad

Nora
Norway
Hi! My name is Nora. I am a 23 year old biology student from Norway and I love to read. I also own some adorable pet rats!

Down Under
by Bill Bryson